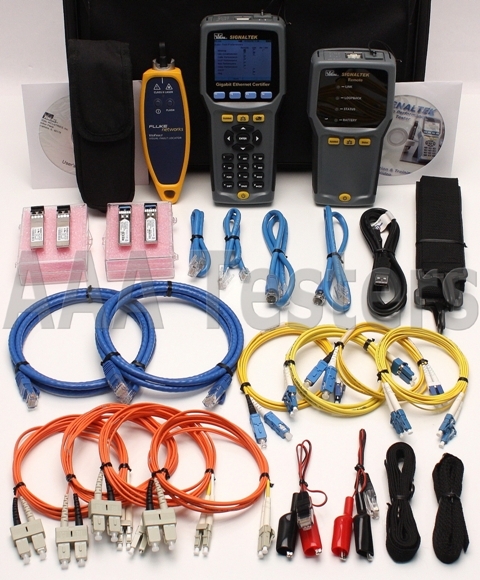 SIGNALTEK is a unique cabling tester that offers the user the ability to test the performance of a wide range of installed cable system characteristics. With SIGNALTEK, the user can verify network performance, troubleshoot connectivity problems, and view network speeds to determine if the installed cable provides the necessary performance to support desired applications.

SIGNALTEK uses the IEEE 802.3ab (Gigabit Ethernet) standard as a reference for cable performance testing. Rather than a traditional certification test where frequency-based parameters such as Near End Crosstalk (NEXT) and return loss are measured, performance or qualification testing, as it is sometimes called, is a Bit Error Rate Test (BERT). Data packets are sent down the cable to the remote handset then re-transmitted back to the display handset where the number of lost or errored packets is counted. The results are displayed for the user to get an instant view of the cable’s performance. A cable performance test is marked as a “pass” or “fail” based on the IEEE 802.3ab parameters which specify the number of error packets allowed in a given test time.

SIGNALTEK is compatible with a variety of cable types and configurations. Cable Performance tests can be run on any type of twisted pair cable that supports Ethernet. Since 10/100 Ethernet requires a minimum of two pairs to operate, cables with only one pair cannot be tested for Ethernet performance, this includes coax cable types.

Wire map – Displays the physical paring of the cable. Also displays the length of each pair, the condition of the termination (terminated, open, shorted) and the delay skew when a Gigabit link is established.

VoIP (Voice over IP) Performance – Similar to the Cable Performance test except that the packets are smaller to accurately simulate VoIP transmissions.

IP Video Performance – Performance test that simulates the size and payload of typical IP video applications.
Note: IP Video is not the same as CATV broadband video. This test is useful to test twisted pair links that will be used to support IP cameras for security applications.

DHCP – When connected to active Ethernet networks the display handset will locate a DHCP (Dynamic Host Configuration Protocol) server and request an IP address from the server. The data displayed is: SIGNALTEK’s IP address, IP address of the DHCP server, the IP address of the network router, IP subnet, and the name of the internet service provider (ISP).

Ping – Displays the results of the ping test when SIGNALTEK is connected to an active Ethernet network. The user can choose the target IP address to ping, the packet size, the number of packets to send,

If you’re selling your Ideal SignalTek please fill out form on the right hand side of page.

© 2014. All Rights Reserved, trademarks & brands are the property of their respective owners.